Neda marches on toward the Edible….

Kingsbury Grade is the Goal. I haven’t even seen the thing, but I hear it’s brutal. I’d be lying if I said I wasn’t downright frightened of giant mountains these days. I drive up them, passing cyclists who look pretty miserable but I stare with envy. How can I become one of those daring people who climb up Mt. Rose Highway, Geiger Grade, or all the way around all of Lake Tahoe? Well, frankly I just need to do it.

Coach Julie suggested I go up the road that leads to the Ritz-Carlton, Lake Tahoe to start. I rode strong down Highway 267 and that itself was enough of a climb for me! Then I made a right turn, following the signs leading up to the Ritz and tried to push it, I really did I promise. But I turned around somewhere between quivering quads and a wobbly bike. OK, so maybe it’ll take a few tries.

I’ve been doing single leg drills which Coach Julie says will help strengthen my legs and get me mentally prepared. She doesn’t want me to freak out, just trust the training… and I’ve been doing a lot of it.

I also had the awesome experience of meeting Michael Phelps at the Celebrity Golf Tournament’s after-party at Harrah’s Tahoe. I told him I’ve always wanted to go to the Olympics. He simply pointed to his head. I said “Yes, I know I’m crazy but what advice do you have?” He said, “No, it’s all mental. You just have to know you’re going to do it and you will.” Woooooaaah! This, coming from the record-breaking gold medalist

himself! I asked him “Well, what about training?” He said, “It’s all mental.” Ok, well there’s no arguing with Phelps. I asked him for a hug and he obliged – his cheek touch my cheek! I have yet to wash my face…

Every time I’d hop on my Trek Bike, I think of Phelps. Doesn’t everybody?!

But his words hit me hard. I realized a lot of cycling is mental. I was feeling inadequate because I didn’t have as much cycling experience as a lot of the people on the road. I had to go through that learning curve of clicking in and out of the bike, I had to learn the right way to wear a helmet, and don’t even get me started on fixing a flat!

But, who cares! As Phelps said, its all mental. If you doubt yourself, you will not make it. If you believe you will, then you will. So with this extra jolt of confidence and a few more weeks of training under my spandex… I decided to go up to the Ritz again.

OK up Highway 267 I go again, then I hang a right towards the big hill. I had no idea how long the road was and I had no idea what curve I needed to pass to make it. So i just kept pedaling. I put the bike into my easy gear and just kept on twirling those feet. Every time I would get exhausted or my legs wanted to stop, I would just tell myself to keep going. I needed to see what was waiting for me at every corner, what was beyond that shadow, what was behind that sign. Until finally, I zoomed underneath some ski lifts and whizzed by the beautiful forest and lo and behold, I saw the prettiest thing ever – The sign to the Ritz-Carlton!! I think they should offer a free room for everyone who rides to the top, don’t you?! I took a pic and sent it to Coach Julie, my best friend, my boyfriend, and posted it on Instagram/Facebook (yes, I have no shame!) If I had Phelps’ digits, I would’ve sent it to him too. 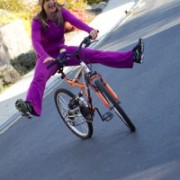 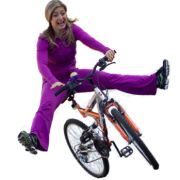 Ride with Neda - the Adventure Continues... 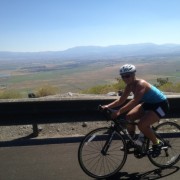 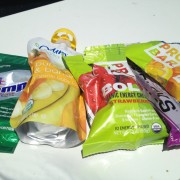 Ride With Neda - WHAT THE GU?