We Are Dedicated to the Community

We are happy to support Reno Tahoe Junior Cycling with their mission to educate, teach, and inspire our Reno-Tahoe youth on the benefits of and how to live an active and outdoor lifestyle with proper nutrition. With one of the world’s largest and most beautiful natural playgrounds in our backyard (Tahoe), we strive to make future generations aware and knowledgeable on the joys and responsibilities of outdoor recreation, using the great sport of cycling.

Girls on the Run

Girls on the Run would like to thank Silver Sage Sports Performance for supporting the 200 participants of the New Balance 5K | 10K Fun Run held in Truckee. The 5K race is the culminating event for the Girls on the Run 10-week program. While many of the girls had never run before in their lives prior to this season, all of the girls basked in the accomplishment of completing a 5K run alongside their peers, coaches, running buddies and a community full of support.
Girls on the Run wouldn’t exist without the support and sponsorship of the community.

Silver Sage Sports Performance has helped the Sugar Bowl Academy Nordic Ski Team reach some outstanding results through their lactate testing procedures. Every year we have Silver Sage test all of our athletes on rollerskis in the fall and we are able to pinpoint each athlete’s optimum training zones from this test. Andy and Julie make an individualized chart for each athlete showing the training zones by heart rate and we then use these zones throughout the season to make sure each athlete is accomplishing what each workout is intended to do.

This scientific approach to training has allowed our skiers to reach National and International success including having 4 podium finishes at the Junior National Championships in the past two seasons and having 15 year old Hannah Halvorsen make the  2014 US Ski team under 18 World Championship team where she had the top us Women’s result of 13th this year in Finland.

We love working with Silver Sage and feel they have been a great part of our success.

Ride 2 Recovery started in 2008 with a telephone call from a recreational therapist with the VA to John Wordin. This therapist thought cycling would be an alternative therapy to PTSD and TBI (Traumatic Brain Injury) as well as physical injury rehabilitation and thought John was the person to create the program they had in mind.

In 2011, R2R was up to seven Challenges per year (Texas, Memorial, Florida, Golden State, Great Lakes, and the 9/11 American Challenge which began in the shadows of Ground Zero on the tenth anniversary of 9/11 and rode through Shanksville, PA, finishing at the Pentagon). The seventh Challenge of 2011 introduced our first Challenge in Europe, The Normandy Challenge, which traced the steps of D-Day and subsequent battles.

In 2012, R2R took 147 riders through Belgium and Luxembourg to ride the Battle of the Bulge Challenge in addition to Texas, Memorial, and Golden State, added the new Gulf Coast Challenge – New Orleans to Tallahassee; the new Minuteman Challenge – Boston to New York; and the new Bluegrass Challenge – Cincinnati to Nashville. Challenges are limited to 200 participants. Now, each one sells out early and has a lengthy waiting list, attesting to the power of the Ride 2 Recovery program.

Cycling is an important part of the recovery and rehabilitation program for many reasons, most importantly:

Silver Sage Sports and Fitness Lab is happy to be the training partner for Race 178, where we offer training tips and injury prevention clinics for participants in Leprechaun Race, Reno-Tahoe Odyssey Relay Run Adventure (RTO), Reno 10-Miler, Journal Jog and Run with the Girls.

The original Auburn Ski Club Auburn Ski Club Inc. (aka the “old club”) was formed in 1928. By 1932 the founders’ vision and efforts had persuaded the State legislature to open Highway 40 year-round ushering in modern California skiing.  The Club’s Cisco Ski Grounds boasted the first engineered Ski Jump in the west and was where many Northern Californians first experienced skiing. Always promoting winter sports, ASC staged Ski Jumping exhibitions in 1934 and 1935 on the UC Berkeley campus and on Treasure Island for the 1939 World Exposition. Auburn Ski Club has saved and collected much ski memorabilia over the years currently  housed in their Western Ski Sport Museum, located at Boreal.

Far West Nordic Ski Education Association is a 501(c)(3) nonprofit organization whose mission is to promote the sport of cross country skiing and facilitate competitive XC skiing for juniors (under age 20), seniors (ages 20-29) and masters (age 30 and up). Far West Nordic is particularly active with juniors, bringing coaching and a variety of training programs to our younger generations.

The Edible Pedal 100® is a fundraiser for the Rotary Club of Reno Sunrise. In cycling terms it’s a century bike ride (not a race). A century ride is typically an organized 100-mile road bike ride that includes rest stops every 15-20 miles. Edible Pedal 100® includes three ride distances: 10, 50 and 100. Start times are staggered with the 100-milers leaving first. They have a fabulous post ride barbecue featuring locally sourced food.

The Reno Wheelmen have been a cycling tradition since 1896 and today proudly carry the tradition on. They are a club dedicated to promoting the sport of cycling in the Reno/Tahoe area. They host the annual Road Twilight Series, Mountain Bike Twilight Series, and Sagebrush Cyclocross Series among other races.

New for 2015 is the formulation of the Reno Wheelwomen’s team. No doubt that women’s cycling for both recreation and competition is growing and Reno is host to a large group of passionate cyclists who want to enjoy, compete, and mentor others into the sport of cycling.

CrossReno was a USA Cycling Sanctioned Cyclocross event with $10,000 in cold, hard cash on the line – equal male-female payout. CrossReno offers professional racers a national ranking event and amateurs a chance to rub elbows with nationally- and internationally-ranked pros fresh from CrossVegas. There are separate categories for masters racers and juniors, as well as a kids race for the littlest competitors. It is also the first race in the Sagebrush Cyclocross Series. 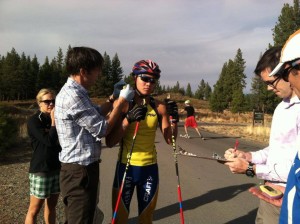