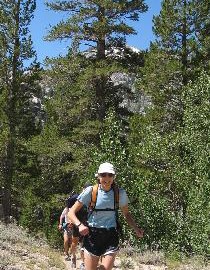 A friend once said that an ultra running aid station under any other circumstance would be a dream buffet – complete with cornucopia of candy, peanut butter and jelly sandwiches made to order, cookies of every make and model, potato chips and coke, among other things. You might say – a dentist’s idea of job security.

Effective fueling – hydration and nutrition, for ultra events takes as much diligent training as the physical aspect and is, like everything, ultimately individually fine tuned. It is an ongoing area of contention and research in an attempt to find that optimum performance formula.

Personally, based on my fueling strategies, I would in the eyes of science-based nutritionists be considered a fueling flunky. When racing a 140K in a European cycling stage race or a 50K trail running race – I would, on a good day drink a few bottles and subsist on several Gus. This is not a conscious decision of depravation – it just seems natural for me. My nutritionists contend I would improve my performances if I consistently ate and drank during the events.

That said it could be that different ultra distances, raced at different intensities demand different fueling strategies. I was speaking about this subject with Dr. Andy Pasternak of Silver Sage Sports Performance in Reno and the Medical Director of the Tahoe Rim Trail Endurance races – who recently attended the American College of Sports Medicine (ACSM) conference.

One of the presentations he attended focused on Gastrointestinal (GI) Distress, a common limiter for Western States runners – and interestingly often a greater factor in the non-completion rate than muscle fatigue or injury.

The presented study, conducted at the Javelina Jundred 100Mile trail run, by Kristin Stuempfle, Martin Huffman and Tamara Hew-Butler, concluded that a lower percentage of fat in the race diet and lower intake rates of fat, protein and fluid may contribute to GI distress in ultra-marathoners.

Dr. Pasternak remarked that, “Fat intake may be a marker for those runners that run smarter.” He continued, “It would be interesting to conduct follow-up tests on racers in different distances, including 50K and 50 Milers – and measure their running intensity along with their caloric intake during the race. There are a couple of possibilities for the findings from Dr. Stuempfle and their group. One is that fat may have some sort of protective effect on the GI system and help decrease GI distress. Also, because fats are more caloric dense foods, runners who eat more fat are able to ingest more calories. Another possibility is that fat intake is a marker for runners who are running in a purely aerobic zone. As running intensity increases, blood flow to the GI system decreases and more runners can have issues with GI distress. The runners who are able to stay in an aerobic zone may tolerate eating more foods (including fats) which allows them to ingest enough energy to successfully finish the race.”

In another study presented at the conference – the research group from Health Sciences Department, Gettysburg College, Gettysburg, Pennsylvania, presented their findings from last year’s Western States, which focused on the race diets of finishers and non-finishers.

The study concluded that race completion was related to greater fuel, fluid, and sodium consumption rates. The finishers consumed 4-6 kilocalories/kilogram/hour, twice as much as the non-finisher, equating to 13,000-16,000 calories over the 100miles. Kilocalorie, fat, fluid, and sodium consumption rates during the first 48 km were significantly greater in finishers than in non-finishers.

Interestingly – the medical experts conducting the above research projects advocate hydrating based on thirst versus a regimented, scheduled fluid intake.

Just Do It
Scroll to top