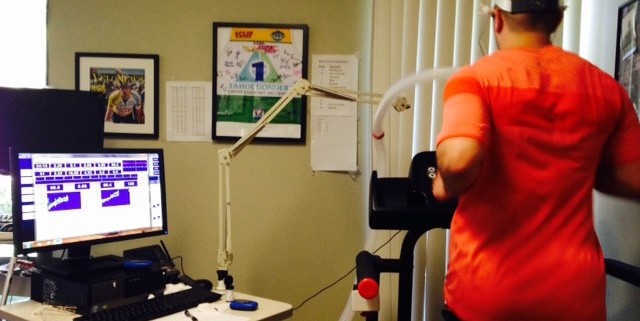 My running shoes are slipped on and the upcoming process was explained. I was asked about my 10K time, about 48 minutes these days, not my best work, but OK.  We were going to be starting the treadmill at 3 MPH and every 4 minutes the speed would be increased by .4 MPH,.  A dab of blood would be taken from my ear each time to measure lactate and then the test would be finished when my “respiratory quotient”, RQ, numbers were over .90 for at least two rounds of the 4 minutes.  Understanding the process, I stood up, got my ear pricked (didn’t even feel it, nothing to be afraid of, and I am TERRIFIED of needles) and walked onto the treadmill, ready for the testing.  I was donned with a sweet oxygen mask and a mouthpiece that fit under my lips, leaving just enough room to drool, which I did a TON of. We adjusted my sweet oxygen helmet, plugged my nose for oxygen exertion consistency, ensuring I was only breathing through my mouth, a dab of blood was taken from my ear to test lactate and we started.  We quickly made it through 3 rounds, the third of which was this really awkward run/walk, making me look as if I had one leg longer than the other, but after four minutes we made it to a slow jog and we were off to the races.

Getting used to breathing only through my nose was tough, but I got used to it as I adjusted to each of the speed increases, hopping off each time to get the blood drawn from my ear, again measuring my lactate.  The running was easy, at a nice comfortable pace, attainable and not super challenging.  The most challenging piece of all of this, beyond the drool like a bull dog, was breathing only through my mouth as the pace increased.  The four minute rounds were always the same: blood from ear, increased speed by .4 MPH.  As we started to get faster, my numbers would increase, I would near the number that was our goal, settle into my pace, and the number would drop, meaning simply that I would need to run a few more of the 4 minute rounds (and that I am kind of an efficient little machine).

About 45 minutes into the test, my numbers stayed consistently above the goal and we were finished with the test, ending at a 7:30 pace, which was somewhat difficult only breathing through my mouth.  We were through, my results were locked into the computer, and Julie politely told me I was a heck of a lot more efficient than I thought I was.

It seemed to end as soon as it began, and it was time for Julie and her team to formulate the numbers for the athlete to understand. 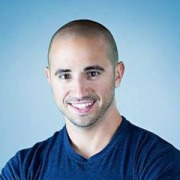 The test that changed the way I look at...Well, everything, Part III

The test that changed the way I look at……. Well, everything

Lactate Vs Power to Determine Threshold
Scroll to top