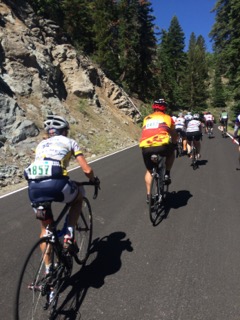 Contributed by physically and mentally gritty Silver Sage athlete, Laurie Marlowe, who committed, invested and diligently trained to tap and realize her potential at the Death Ride…

One cold evening last December as I sat in front of my laptop, my thoughts turned to the Death Ride.   It’s been remotely in my radar for a number of years though I thought I’d sworn it off.  I’d been working with Julie Young, Head Coach of O2Fitness/Director of Silver Sage Sports and Fitness Lab, for the last few months and she was encouraging me to target some goals for summer of 2015.  Death Ride, I thought?   For those of you who aren’t familiar, the Death Ride, aka Tour of the California Alps, is a legendary 5-mountain pass, 129- mile, leg burner of a ride with a total of 15,000’ of climbing.     Registration is limited to 3000 people each year and it fills up in two days. Just for the heck of it I clicked on their website to see when registration opened.  And guess what?  Registration opened that next day.   I took this as a sign and decided that I needed to go for it.  Sent a quick text to my husband who was in Chile on business at the time.  “Wanna do the Death Ride next year?”  I asked.  Seconds later and without hesitation came the reply, “Sure.”    Oh, oh–what had I gotten myself into?

Now I should state that I’ve been riding for a lot of years.   That said, I’ve never quite tackled anything of that magnitude.  And I am, umm, well over 50 at this point: (that’s all the information I’m sharing on this topic).   Have done a few centuries in the last few years, and some fairly big climbing days both locally and in the Dolomites in 2012, but never 15,000 vertical in a day.  And never 125 miles in one day.  I knew that I could do it, but I wondered, how torturous would this be?  Would I never want to see my bike again?

Over the next months Julie guided me though a program that included fast/hilly rides or hill interval work on Saturdays and longer endurance rides on Sundays.  (Endurance on tired legs, she always stated).  Weekday workouts were varied but structured and included slow frequency repeats for strength, intervals on flats and hills, as well as hip activation and hip/trunk stability.  Not every week was perfect.  A full time work schedule along with going back and forth between two homes presented it’s challenges, but I stuck to the program as best as I could and did my best to make up for any weekday shortcomings on the weekends.   I fit in a few yoga classes to stay flexible.   And just as important as the workouts were the rest days and rest weeks.  As the event got closer, I was putting in an average of 170 miles per week and upping the ante on Sunday rides with more climbing and more distance/hours than previously.

Fast forward to July 11, 2015.  After a 3:30 a.m. wake up call, a light breakfast in our hotel room, a short commute to Turtle Rock and we were right on target for our 5:30 a.m. start.  Weather was cool but beautiful.  As we ascended Monitor, our first pass, I kept Julie’s words in mind.  “Break the ride up into segments.”  I had done so in my mind many times and now I was riding at my own pace, comfortably passing many and with absolutely no temptation to get into a ‘race’ at this stage. The descents were serene and relaxing—a chance to recharge.

Took advantage of the fully supported ride to eat and drink frequently, stopping at least briefly at most rest stops.  I had packed a full stash of gels just in case but honestly didn’t eat any of them, going instead for handfuls of chips, fruit, fig bars, and most memorably some amazingly delicious steamed and salted baby red potatoes at the base of Monitor.

I was finding my groove by the fourth pass and ascended the backside of Ebbett’s easily, feeling great, passing many while still staying well within my tempo/sub-threshold pace.   By 1:15 we had completed 4 passes and enjoyed a relaxed and somewhat jubilant lunch at the base of Ebbett’s Pass.   We now had ridden around 80 miles, but still had nearly 50 to go with another 2900’ of climbing.  This would prove to be the most challenging segment, after climbing 12,000 feet already.

Still I knew at this point that my goal of completing five passes would be realized.    The last 2000’ of climbing up Carson was no doubt the toughest part of the ride, but all of the training had paid off.  I think particularly helpful was the practice of doing long often strenuous endurance rides on Sunday, which were always performed on “tired legs” after interval work on Saturdays.  My body knew how to do this—it had been there before!   Around 4:30 p.m. we reached the top of Carson and we were back to our car around 5:45, a little over 12 hours after we started.

Feeling tired but happy, I thought about something that Julie had said many times.  “When you’ve done your training, once you get to the event [whether it’s a race or an endurance event], you’ve done the work.  Now you get to enjoy.  And you know what?  She was right.