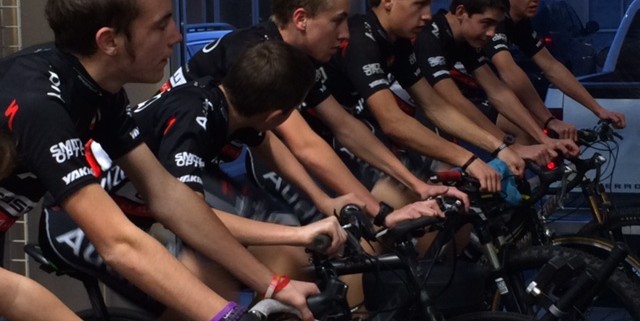 Thresholds and power are always discussed when training in cycling. When you talk about thresholds you are talking about power, and that power is measured in watts. Your Functional Threshold Power, or FTP, is how many watts you can hold for an hour. Your weight plays a role in your FTP, as well. Theoretically, if you weigh 150 pounds and have an FTP of 250, and you’re racing against a person that weighs 250 pounds with the same FTP, you will be faster. This is known as your “power to weight ratio” or “watts per kilo”. At the beginning of this season Reno-Tahoe Junior Cycling started taking what’s known as FTP tests. These tests measure exactly how much power you can withstand for an hour and the results we got were quite surprising. Before the tests, we all asked our coach, Trevor DeRuise, what power would be suitable to shoot for. We got a straightforward answer of 220 watts. This would be enough to be competitive in Cat 1 races but not anywhere near winning and for only having 2 years of structured training, that was a reasonable goal. When the test started we all realized how much speed and strength we had actually gained during those short 2 years. Almost everyone on the team was hitting numbers way higher than 220 making it clear that we were definitely ready to start racing more competitively and higher categories. After the first FTP test, the average FTPs for our team was between 230-240. This was the beginning of the season though and work had to be done. We continued our normal structured training and were promised that over time this would raise our FTPs. With races becoming more competitive and sometimes shorter distances, power output is viewed as very important from our team. After another month of training, we took our second FTP test and the numbers were surprising. Everyone had moved up, and not just by a little bit. Every rider on the team had increased by over 10 watts. Some had even moved up 20 watts after just one month. This proved to us that the only way to increase fitness is to have a plan and work hard.

Racing Outside the Box
Scroll to top