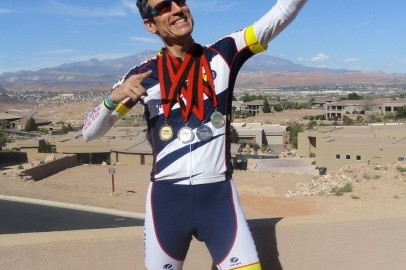 There were just 100 yards to go and the two cyclists who’d been battling all week were one and two. The lead cyclist jumped and began sprinting for the line!  The other cyclist was able to catch back on behind him and stay in his slipstream. Then the trailing cyclist made a move to come around and fought with every muscle fiber to make it to the finish line first. He won by half a wheel!

It’s a scene we have seen played out countless times on television by pro racers. The difference was that winning cyclist was me, a 59 year old competing in the 55-59 age group of the Huntsman World Senior Games in St. George, Utah. Sprinting for a victory in a sanctioned race was something I hadn’t considered when purchasing my first road bike a decade earlier. Four years earlier in this very same road race, my first cycling race ever which I competed in as a lark (invited by a friend to try it), I was a backmarker who was just happy not to finish in last place. I finished a number of minutes behind the winner. This time, the road race win was my second gold medal of the week.

Early in 2014, I was looking for some way to boost my performance to a more competitive level using a coach and found Julie through mutual friends. When conversing with Julie, I was impressed when learning that she could offer not just on-bike workouts, but off-bike workouts and mental strategies and tactics too. I decided that was just what I needed and jumped in. As it turns out, every one of these aspects helped (and by the way, her coaching works fine even if you live out-of-state…I live in St. Louis, MO).

Leading up to the road race described above were three other races. The first was the Hill Climb. The distance is 5K. For me, it’s torture but thankfully it doesn’t last too long. Riders are disbursed in 30 second intervals and the aim is to get to the top as quickly as you can. Suffice to say that after three previous year’s of battling up this canyon, I won!  My fitness from hill training and core work was better and Julie’s tip to keep asking myself if I could go faster was a mental assist as the legs cried out and the lungs were exploding. It was my first win in a cycling race and one I’ll never forget.

The second day was the time trial. I hadn’t mentioned that I was riding a rental road bike this year and it was not only a bit smaller frame than my bike at home, but its geometry was not to my liking. Slapping on aerobars increased my discomfort but I made the best of it with a personal best for the 20K distance and a second place.

The next day was the criterium and we decided the race plan would include trying to stay up in the top five (this was a 25-30 man mixed age-group field) if possible. That part worked like a charm, and only at the end was I nicked for the victory by a fellow age-grouper.

Going into the fourth and final day, a 24 mile road race, I was in second place for the overall.  A strong rider who won the last two days and was third in the Hill Climb (by points: 5-10-10) had me by one point (I was 10-7-7). If either of us got a podium victory we would win the overall.

And it turned out storybook. You’re never too old to experience thrills and excitement like sprinting for a race win or simply being competitive enough to be in the mix to possibly make a podium. It takes hard work, sure. But guided by a coach with Julie’s background, dedication and caring concern for her athlete’s not only is anything possible, but improvement of your health and performance is probable. I think I can still get faster and that’s the goal for 2015.