I have to warn you, I had a lot of time on the plane and I was still pretty excited about my first Midwest trip and my first 50k race, so this is a long one.

It wasn’t until a couple weeks ago that I decided that I would travel across the country to race the American Birkebeiner 51k skate race. I got lucky and got a spot in a house and van with a group of Wyatt’s friends, booked my ticket and confirmed my entry. After all, it is THE American ski race and any American ski racer needs to do this race at some point

Though, when I got settled in again in Truckee last week, after having traveled through Europe and Vermont for the last three months, I started to get nervous about a few things: Length, cold and logistics.
I hadn’t been able to put in a real long distance workout pretty much since the beginning of November – I’ve been busy racing. I had done 25 races before the Birkie already. Racing for a longer time than I had been training in a while seemed a little interesting.
Also, after racing in Vermont I had some idea what the temperature (low teens in the forecast) on race day would feel like, but a bunch of sports bra skis at Auburn Ski Club made me question if I was gonna be able to handle it.
Finally, how was I gonna get to the start, where to put warm up skis, where to get bibs, where to feed, what’s the course like, the start area, the traffic situation etc??? Lots of unknowns!

To make a long story short- I had a fantastic day. I was able to hang on to the lead pack, with three very speedy women who are competing in the FIS marathon cup and who all have lots of experience in marathon racing, for most of the race.

At some point I was skiing in the very front and I realized that I was leading the way for, well about 10,000 racers, and I just had to smile. Pretttttty cool. 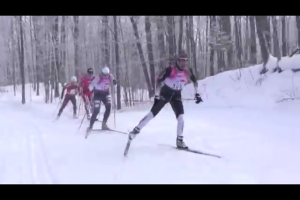 Tatjana and I sprinted for third down Hayward’s Main Street and while she won the sprint and ended up on the podium after we battled it out for the last (brutal) 7k after Holly put down the hammer and dropped us, I was pretty glad to not have face planted in front of the huge (!!) crowd in Hayward. And trust me, I almost did because sprinting at the end of a marathon turned out to be pretty hard and 4th place is still pretty exciting. 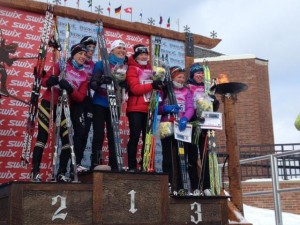 Sabra finished top 15, and all three of our boys top 25, so I think it is save to say that the Far West Elite Team had a hell of a great day.

If you have done a marathon or even the Birkie before (in which case you should give yourself a pat on your shoulder right now) you might be entertained by some of my rookie mistakes, and if you haven’t maybe this will be useful one day.

Here are 11 lessons I learned from the Birkie:

1. Do NOT just slip your gel or whatever you are planning to eat in your race suit tights.
It will slide down. It will slide down all the way to your calf. For some reason I thought that that one GU on my calf was gonna be all I needed, so about 30k through the race I figured I better take it. Especially since some of the other girls had been eating a whole lot more already. Don’t ask how I managed to fish it out of my tights while skiing- I won’t ever do it again.

2. In fact, if you are a girl here is what you should do instead.
(Caitlin Paterson showed me this trick, pretty smart). Put the GUs (plural!) in your sports bra, tape a string that comes out of the top of your race suit to them and tape that string to your bib. I’m sure staples and safety pins help a whole lot too.

3. Fuel up prior to the race.
I want to claim that I did a great job at eating (who would have guessed)
and that it helped me out lots! I really ate a lot all last week, made sure I was well hydrated (DripDrop does the trick!) at all times while traveling, and fueled up on lots and lots of carbs on Friday.

4. It is incredible nice to have support out there.
Thank you, thank you, thank you Salomon. It is so nice to not have to deal with waxing skis (or testing), even though we do have all that good Toko stuff for our team to put on ourselves. The new carbon boards I was put on were incredible (pretty sleek and sexy looking too;)). In fact, think I had the fastest skis out there- every skiers dream!! The Salomon crew also supported me all the way through the races with feeds which, see #5, saved the day.

5. DO bring your own water bottle.
I didn’t. I’m not even sure anymore how I rationalized that but I realized on the start line that about everybody else did have a little belt. While there are plenty of factory feeds out there, it is easy to miss or drop one, or two, and that makes for quite a while without a feed. Any time I’ve taken feeds in races before I really barley took a sip, so actually drinking was quite a challenge for me. Seeing how much those other girls drank helped me force myself to get every feed I could. Even though it meant wet hands every time because those
little cups spill when you grab them!

6. Travel with people who know their way around.
This race isn’t your classic show up at the venue-warm up-put your bib on-go race type thing I’m used to. Thus, it was so great to have someone who was driving, who knew where to get the bibs, what the different trail heads where etc. I also made a new friend, Ari, (see #7) who writes a blog called birkieguide.com. Check it out for some great insights!

7. Birkie is great for making new friends!
I have never in my life seen so many skiing loving people in one place. It’s awesome! When I was traveling with my Toko bag, Salomon water bottle and shoes and Swix sweater I was recognized as a skier a whole bunch of times. (“Hey Swix, how was your race?” Or “my friend has the same sneakers, he’s a skier”) On the way to Minneapolis my answer to the question which start wave I was in (elite wave, first row, bib 6) got me some new friends and on the way home my 4th place finish got me a couple high fives and even a picture. Pretty fun!

8. DO dress appropriately.
I did, yay! I wasn’t cold, I wasn’t hot, I’m so happy. Wyatt has suffered from hypothermia at this race a couple times before so I was paranoid that I would get too cold- it was about 12F yesterday. Still, after my warmup I made a last minute call to take off my second layer on the top and go without face tape. I realized throughout the race that that was pretty smart because if you do get too hot and sweaty, you’ll get really cold on the downhills! One layer of wind proof Swix long undies top and bottom, toe warmers, buff, thick hat, Toko’s Arctic gloves and of course a little Far West face tattoo did the trick for me.

9. DO bring friends.
I got out of the doping control (try to pee after such a long race) where I made friends because I didn’t need a translator like the other European girls (thanks UVM) and I felt like a lost puppy. Soo many people in Hayward. Everywhere. Needless to say I was really really happy when Pat texted me to check in and I found Spence and the other Far West kids just a little after that. Big hugs from teammates help a lot when you are tired. I was very very tired.

10. Friends are the best (always!)
They talk me through the race course, through potential racing scenarios, assure me that I have done plenty of long workouts, give me hugs and text me that I AM tough enough and that it WILL be fun. They give fantastic advice like to relax (duh), not to overthink, to suck tit (to hang on, definitely my favorite one), and not to lead on the lake (no comment). They also give out great love via phone before you can get your real life hugs – you guys all are the best!

11. Birkie fever is a real thing.
Luckily I had made sure that I got plenty of sleep and rest the week prior to the race because I barely slept at all the night before. I thought I had done enough races this year that getting nervous wasn’t really a thing anymore but I guess this one is very special

Big shoutout to all the sponsors – lots of awesome businesses, but also Far West’s amazing community – of the Far West Elite Team. We are incredibly fortunate to be able to travel all over the place and experience cool events like the Birkie. Wouldn’t be possible without all of you!